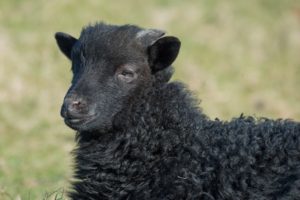 Just a picture of a black sheep.

Introduction. Hal Daumé III wrote an interesting blog post about language bias and the black sheep problem. In the post, he defines the problem as follows:

The “black sheep problem” is that if you were to try to guess what color most sheep were by looking and language data, it would be very difficult for you to conclude that they weren’t almost all black. In English, “black sheep” outnumbers “white sheep” about 25:1 (many “black sheep”s are movie references); in French it’s 3:1; in German it’s 12:1. Some languages get it right; in Korean it’s 1:1.5 in favor of white sheep. This happens with other pairs, too; for example “white cloud” versus “red cloud.” In English, red cloud wins 1.1:1 (there’s a famous Sioux named “Red Cloud”); in Korean, white cloud wins 1.2:1, but four-leaf clover wins 2:1 over three-leaf clover.

Black sheep in social reality. The higher occurence of ‘black sheep’ tells us that in social reality, there is a concept called ‘black sheep’ which is more common than the concept of white (or any color) sheep. People are using that concept, not to describe sheep, but as an abstract concept in fact describing other people (“she is the black sheep of the family”). Then, we can ask: Why is that? In what contexts is the concept used? And try to teach the machine its proper use through associations of that concept to other contexts (much like we teach kids when saying something is appropriate and when not).

As a result, the machine may create a semantic web of abstract concepts which, if not leading to it understanding them, at least helps in guiding its usage of them.

We, the human. That’s assuming we want it to get closer to the meaning of the word in social reality. But we don’t necessarily want to focus on that, at least as a short-term goal. In the short-term, it might be more purposeful to understand that language is a reflection of social reality. This means we, the humans, can understand human societies better through its analysis.

Rather than trying to teach machines to imputate data to avoid what we label an undesired state of social reality, we should use the outputs provided by the machine to understand where and why those biases take place.

And then we should focus on fixing them. Most likely, technology plays only a minor role in that.

Conclusion. The “correction of biases” is equivalent to burying your head in the sand: even if they magically disappeared from our models, they would still remain in the social reality, and through the connection of social reality and objective reality, echo in the everyday lives of people.