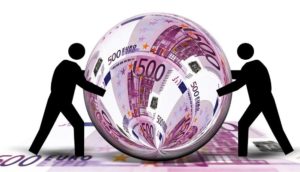 With this post, I’m anticipating the next phase of debate on European financial crisis, as the problem of asynchronous economies isn’t going away. The continent is currently riddled with the refugee crisis, but sooner or later the attention will return to this topic which hasn’t been properly dealt with.

In brief, there are two countries:

Both countries, however, have the same monetary policy. They cannot control money supply or key interest rate by themselves according to their specific needs, but these come as a some kind of average for both – this “average” is not optimal for either, or is optimal for one but not the other.

As Milton Friedman asserted long ago, the differences of such kind result in an un-optimal currency area. We’ve seen his predictions take form in the on-going European financial crisis which in this case results from the un-optimal property of the European Monetary Union (EMU).

How to solve the problem?

Some potential solutions are:

1. Fiscal transfers from surplus to deficit countries — seems impossible politically, and also leaves the moral hazard problem wide open (this solution suffers from disincentive to make structural reforms, and is dangerous in the sense it can bring hatred between EMU countries)

2. Budget control to European Central Bank (ECB) — in this case, the central bank would exercise supreme power over national budgets, and would approve only balanced budgets. From a simplistic point of view, this seems appealing due to the fact that it would it forcefully prevent overspend, and there would be no need for the dreaded fiscal transfers.

However, the problems with this approach are the following:

a. It takes away the sovereignty of nations — not a small thing at all, and non-federalists like myself would reject it only for this reason.

b. The economic issue with it is the ‘shrinking economy’ problem – according to Keynesian logic, the state needs to invest when the private sector is in a slump to stimulate the economy. Failing to do so risks a vicious cycle of increased unemployment and decreased consumption, resulting in a shrinking, not growing GDP.

So, I’m not exactly supporting the creation of balanced budgets at the time of distress. The only way it can work is as form of “shock therapy” which would force the private sector to compensate for decreasing public sector spend. Which, in turn, requires liquidity i.e. capital. Unfortunately, lack of trust in a country also tends to reflect to companies in that country in the form of higher interest rates.

Which leads to me another potential solution which again looks eloquent but is a trap.

This is just sub-prime once again. In other words, we take the loans of a reliable country (credit rating A) and mix them with an unreliable country (credit rating C), and give the whole “package” and overall rating of B which seems quite enticing for the investors buying these bonds. By hiding the differences in ability to handle debt, the pool is able to attract much more money. In brief, everyone knows this leads to the dark side of moral hazard and will eventually explode.

For this reason, I’m categorically against euro-bonds. In fact, the European debt crisis was in large part due to investors treating sovereign bonds as if they were joint bonds, granting Greece lower interest rates than in the case it would not have been an EMU member state. Ironically enough, some people actually appraised this as a positive effect of the monetary union.

So, what’s the final solution then? I think it’s the road of enforcing the subsidiarity principle, in other words re-instituting economic power to local governments. The often evoked manifestation of this, dissolution of euro, could potentially be avoided by using the national banks (e.g., Bank of Greece) as interest-setters, while the ECB would keep in its control the supply of money.

I was even considering this would be given to national banks, but the risk of moral hazard is too big, and it would result in inflation concerns. But controlling the key interest rate would be important, especially in the sense that it could be set *higher* in “good countries” than what they currently have. Consider a high interest rate (i.e., low credit expansion) in Germany and a low interest rate (i.e., high credit expansion) in Greece; the two effects could cancel each other out and repel the fear of inflation.

However, the question is – are the “good countries” willing to pay a higher interest rate for the “bad countries'” sake? And would this solution escape moral hazard? For it to work, ECB would either credibly commit to the role of the lender of last resort, or then become the first lender. In either case, we seem to recursively go back to the risk of reckless crediting (unless national banks would do a better job in monitoring the agents, which they actually might do).

In the end, something has to give. I’ve often used the euro-zone as an example of a zero-sum game: one has to give, so that the other can receive. In a such a setting, it is not possible to create a solution which would result in equal wins for all players. Sadly, the politicians cannot escape economic principles – they are simply not a question of political decision-making. The longer they pretend so, the larger the systematic risks associated with the monetary union grow.

The author has been following the euro-crisis since its beginning.