A few thoughts on ad blockers 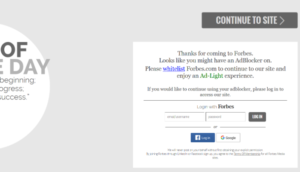 Introduction. So, I read an article saying that ad blockers are not useful for the users. The argument, and the logic, is conventional: 1) the internet is not really free; 2) publishers need advertisers to subsidize content creation which in turn is also in the users’ interest, because 3) they don’t have to pay for the content. Without ads, the publishers will 4) either start charging for the content or go out of business. Either way, 5) “free” content will cease to exist. (As a real example, the founder of Xmarks wrote a captivating article about the consequences of free-riding in startup context. I encourage to check it out. [1])

Problem of rationality. The aforementioned logic is quite good. But where I disagree with the article is the following argument:

“as soon as users understand the implications of ad blockers [they will] delete them […].”

Based on general knowledge of human behavior, that sounds too much like wishful thinking. In this particular case, I think the dynamics of the tragedy of the commons (Hardin, 1968) [2] are more applicable. We might, in fact, consider “free” content as a type of common (shared) resource. If so, the problem becomes evident: as user_i starts exploiting the free content [3], there is no immediate effect either on the user in question or other users.

There is, however, a minimal impact on the environment (the advertising industry). But because this effect is so small (a few impressions out of millions), it is left undetected. Therefore, it is as if exploitation never took place. This not only gives an incentive for the user_i to continue exploitation, but also signals to other users that ad blocking is quite alright. In consequence, the activity becomes widespread behavior, as we now have witnessed.

Mathematically, this could be explained through a step function. 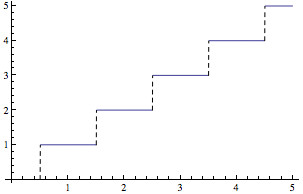 The problem is that the negative effects are not linear, but only become an issue when a certain threshold is met. In other words, it is only when user_n exploits (uses ad blocker) when the cumulative negative effects amount to a crisis. At that point, we have a sudden change in the environment which could have been prevented if the feedback loop would be working and accurately reflecting on user behavior.

Complexities. However, the issue is slightly more complex. As many anecdotal and empirical examples show (boiling frog, slippery slope, last straw, etc.), the feedback loop could only work if it had a predictive property, because each transition from state S_t to S_t+1 does not cause an observable effect which would be large enough to justify change of behavior. Thus, prediction of outcomes of a particular behavior is required — something which humans are poor at, especially at a collective level. Second, the availability of information is not guaranteed: the user_i may not be aware of the actions of other users. To solve this problem, a system-level agent with information on the actions of all agents (e.g., ad block users) is required.

Why does ad blocking take place? Indeed, if it’s so harmful, why do people do it? First of all, people may not be aware of it. Advertisers should not be over-estimating users’ rationality or their ability to predict systemic changes; it is not uncommon that systemic problems are ignored by most people. They simply don’t think about the long-term consequences. But even if they did, and realized that the ad blockers ultimately decimate free content, they might still block the ads. Why? Well, for two reasons:

Generally speaking, people have a tendency to prefer short-term rewards (instant gratification) over long-term rewards, even if they’d be much higher. That’s why many people buy a lottery ticket every week instead of working hard to realize their dreams. Also, although the long-term benefit of ads does introduce a pay-off for user_i, that payoff is lower than the “service” he is doing for others, so that reward(u_i) < reward(u_I), where I includes i. Under some circumstances, the psychological effect might be to over-emphasize own immediate benefit over a larger long-term benefit when there are others to share it. In fact, such behavior is rational in a way rationality is usually defined: making decisions based on self-interest.

Second, 2) users might expect someone else to fix it; free content is taken for granted and the threat for its existence is not taken seriously. This is commonly known as “somebody else’s problem”. Yes, we know that keeping lights on in the university toilet wastes energy, but let someone else turn them off (this is a real example based on author’s own perceptions…). The user_i perceives, perhaps correctly, that his contribution to the outcome is marginally low, and therefore does not see any reason to change behavior. If you think of it, it’s the same reason why some people don’t see voting worthwhile; what good does one vote do? Paradoxically, it makes all the difference when that logic prevails in large part of the electorate.

Third, 3) they just might not care. The value of free content might not outweigh the nuisance of ads; user_i might just be without content rather than seeing ads.
Even if this scenario seems a tad unrealistic when viewing a users’ entire media consumption, it might apply to a particular publisher. For example, when publisher_j introduces anti ad blockers, the user simply frequents the website of publisher_k instead.

Two drivers are in favor of this development:

Conclusion. Many of these problems are modeled in game theory and have no definitive solutions. However, there is some hope. We can distinguish short-term rationality and long-term rationality. If the latter did not exist, anything that requires momentary sacrifice would be left undone. For example, individuals would not get schooling because it is more satisfactory to play Pokémon GO than to go to school (for most people). But people do go to school, and they do (sometimes) make sacrifices for the greater good. Such behavior is also driven by socio-psychological phenomena: say it would be a strict norm in the society not to use ad blockers, i.e. their use would not be socially approved. The norms and values of a community are strong preventers of undesireable behavior: that is why so many indigenous cultures have been able to thrive under harsh circumstances. But in this particular case (and maybe in the West altogether, where common value base is perhaps no more), it is hard to see the use of ad blockers becoming a “no no”. If anything, the youth perceive it as a positive behavior and take cue.

Suggestions. According to the logic of the commons problem, everyone suffers if no mechanism for preventing exploitation is not developed. But how to go about it? I have a couple of ideas:

1) It is paramount that the publishers acknowledge the problem – many of them still run their advertising operations without really thinking about. They say: “Sure, it’s a problem” and then do nothing. In a similar vein, blaming the users is an incorrect response, although it might be empathically understood when examining advertising as a social contract. For example, publishers see that users are violating the implicit contract (exposure to ads –> free content) by using ad blockers, whereas users see that publishers are violating the contract by placing too many ads on the website (content > ads). According to the previous example, there is not a common understanding or definition of the contract — perhaps this is one of the root causes of the problem. People know they are shown ads in exchange for consuming content they don’t have to pay for, but what are the rules of that exchange? How many ads can be placed? What type of ads? Can they circumvent the ads? Etc.

Second, 2) the motives for ad blocker usage need to be clarified in depth – what are they? From my own experience, I can tell I use ad blockers because they make surfing the Web faster. Many websites are full of ads which makes them load slowly – the root cause here would be ad clutter, or (seemingly) willingness to sacrifice user experience over ad money. I’m just one example, though. There may be other motivations as well, such as ads seem untrustworthy, uninteresting, or something else.

Whatever these reasons are, 3) they need to be taken seriously and fixed, going to the root of the problems. Solving the ad blocker problem requires systemic thinking – superficial solutions are not enough. It’s not a question of introducing paywalls or blocking blockers by technical means; rather, it’s about defining the relationship of publishers, users, and advertisers in a way that each party can accept. Because in the end, ad blockers belong to a complex set of problems that can be described as “no technology solution problems” [5], or at least technology is only a part of the solution here.

[3] Essentially this is equivalent to resource exploitation, although nominally it seems reverse.